It was the weekend before Halloween, and there was still a sense of mourning in the neighborhood for the end of the Indian summer. It was overcast, and the air was crisper and cooler than before. People say there are no real changes of season in Southern California, but they are wrong.

We kids were riding our bikes in the semi-circular driveway in front of the Johnson house. When neither of the parents’ cars was parked in the driveway, we rode our bikes in one entrance and out the other back into the street.

Lifting the front tire over the lip of the driveway, we veered left up a gentle slope past the front of the house and rolled back down onto Sunray Place. It was like the drop-off in front of a hotel, but in my imagination, it was a suburban Velodrome.

In the middle of the semi-circle was a garden of sorts protected by a tall hedge with waxy leaves. The arc-shaped bush was bookended by brick columns on either side, one of which had a mailbox in it.

The hedge created an enchanted hollow, with ornamental Chinese grass and miniature footpaths, which would have been a perfect place for a few half-hidden garden gnomes.

Eric Johnson, or “E.J.” as we called him, was in the garage fixing his bicycle. I was bored waiting for him, so I rode my bike around and around the driveway. I imagined I was Speed Racer, competing against an evil motorcycle gang in a surreal cartoon landscape.

E.J.’s younger brother Colby climbed up on the brick column, which had the mailbox in it. Colby dangled and alternately kicked his legs as he held a paper towel under what looked like a soup can. He jabbed a fork into the can and shoved the contents into his mouth.

“Yuck! What are you eating?” I asked Colby.

“‘Beanies and Weenies,’” he said, holding up the can for me to see.

“Gross!” I said, completely stopped in my tracks. I gagged a little.

“Aren’t you supposed to put that in a pot and heat it up?” I asked.

I straddled my bike and stared up at Colby on his perch, contemplating the slippery, cold pellets in his mouth. I thought of my mom spooning ALPO dog food into the bowl for our untrainable Kerry Blue Terrier named 'Finn MacCool.'

To get some fresh air, I resumed my laps around the driveway. Colby was on my left as I came around the semi-circle down the slope of the driveway, then out onto the street again. As I re-entered the driveway, E.J. was still bent on one knee, working on his bike. The Styx song "Renegade" blasted from the radio on the smooth garage floor.

I came back around the front of the house, and this was the most fun part of the trip, reaching the top of the driveway and then hauling ass down the incline into the street. The problem was that the hedge of bushes blocked the view of the road.

"Tell me if any cars are coming, okay?" I said to Colby as I approached him.

"Uh-huh," he grunted, slurping some slime off his chin.

I popped out onto the street again and turned left, starting another lap. I entered the driveway, passed E.J. in the garage, went up the slope, and came around the turn.

"Nope," said Colby, hunched over and engaged like an ape cracking open a coconut.

As I exited the driveway, I looked to my right and saw our teenaged neighborhood hero Pete Overlund hugging, and just about to kiss a girl near the Knudtson's lawn. Pete stood about two feet taller than the girl, and I found that funny, but I dare not make a sound.

I pedaled again up Sunray Place and entered the driveway. In the East County, a kid's BMX bike was as vital to him as a horse to a cowboy, or a surfboard to a beach kid. Unfortunately, I had a piece of crap bicycle at this stage.

It was a Huffy bike that was more of a toy than a real dirt bike. I longed for a Redline, Torker, or even a more lowly Schwinn. My bike did not even have hand brakes. Pedaling up the street took all my effort because the crankshafts were so short on the pedals, and the bike so heavy and unwieldy.

Exhausted, I made it back into the driveway, to the top of the curve, and I started cruising towards Colby again.

I stopped cruising and stood to pedal harder down the slope to gain maximum speed. I exploded out of the driveway.

That’s when I crashed into the passenger side of a Lincoln Continental barreling down the street at about 35 miles per hour.

My front tire slammed into the car, like a Jet Ski into the side of a battleship. I felt like the guy falling off the ski jump on the introduction to ABC’s The Wide World Sports. Instead of flying over the hood of the car, however, I simply hit the steel beast head-on and helicopter-spun in a 360-degree turn, falling directly to the street.

The landing was gentle, all things considered. In fact, the collision went well but for the fact that the back tire of the colossus ran over and crushed my right foot.

The Lincoln Continental slammed on its brakes, laying down ten feet of smoking tire tread marks, then it stopped. I lied on the ground staring up at the dark gray sky.

Colby dropped his can and slid off the brick mailbox column. Eric ran out of the garage. I was whimpering but not crying. When Pete Overlund and his babe walked up near me, I leaned up on my elbows.

“Jackie Blue’s hurt,” said Pete. Pete’s nickname for me was Jackie Blue, after the AM radio song. It sounds cool now, but it irritated me back then. Pete would never have called me that if I liked it.

The girl wore Dolphin shorts over a one-piece bathing suit. She never spoke, but simply clung to Pete. I’d never seen her before, nor would I ever see her again. I wanted to hear her talk. We had no girls in our neighborhood.

“Yeah, you are Jackie Blue . . .” said Pete, with a smirk that told me he knew I was not going to die, and that whatever injuries I had, it was already a funny story.

“No, I’m nooooooooot,” and at that point, I started heaving and sobbing uncontrollably. Pete’s wisecrack broke the seal, and I started bawling.

I reclined back on the street and gave in to crying, not so much out of pain, but out of a primal realization that I had just escaped death. 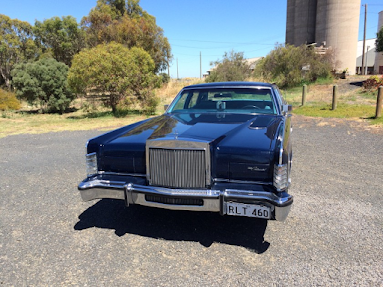 The driver was the neighbor Mr. Avery. He had dark, slicked-back hair, big round eyes with thick glasses, and he looked like Lon Chaney. The Averys lived in a house on a hill that loomed over the cul-de-sac, at the end a long steep driveway. To us kids, it was like the house from Psycho because it was hidden, and we rarely saw its inhabitants. 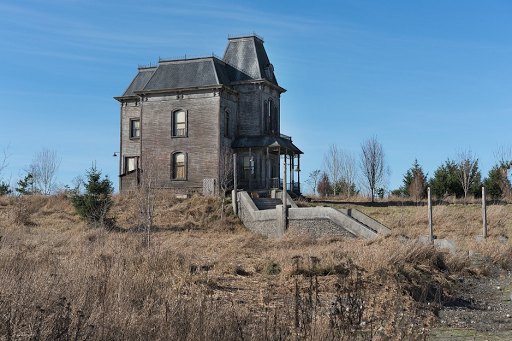 Mr. Avery got out of the car, marched up the street, and scooped me up off the asphalt, like the Tall Man from Phantasm. He lowered me into the dark velour back seat, which had sconces on the padded sidewalls, like a haunted house. Placing my bike into the trunk, Mr. Avery pushed the door down gently, and the diabolical death mobile engaged and shut the trunk itself automatically.

Mr. Avery turned ‘The Car’ around and drove it up the hill to my house on the corner. As the hearse pulled into the driveway, my mother was where she always was, at the kitchen window, working over the sink doing dishes or cooking. I saw her eyes bug out of her head.

Mr. Avery walked my limp body up to the window and lifted me up, like Frankenstein offering up to the villagers the child he just suffocated by accident down by the lake.

My mom dried her hands, ran through the garage, and opened the side door for Mr. Avery to carry me into the house, and put me down on a couch.

Colby had failed to spot a Lincoln Continental, the largest U.S. production model of car ever made available to a non-President.

We did not call my Dad because it was the early 80’s, and you never called Dad at work unless it was a real emergency. I was still alive, so my Mom, my brother, and I all agreed there was no sense in pissing Dad off.

Dad was a doctor at the same hospital where they would put me in a cast. Mom figured we would probably see Dad in the parking lot anyway.